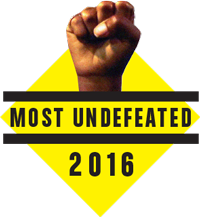 UrbanDictionary.com defines the slang word “woke”as “Being aware … Knowing what’s going on in the community.” In the sports world, there may not be a head coach more “woke” than this 67-year-old, opinionated, sarcasm-loving, world-adoring and socially aware white man named Gregg Popovich.

“He’s not the typical coach for sure,” San Antonio Spurs forward LaMarcus Aldridge told The Undefeated. “He’s in tune with what is going on around the world with people and with race. He’s not afraid to voice his beliefs and his opinions. He’s tried to help us realize that there are more things than basketball, more than the NBA.

“Of course, take your job seriously. But he tries to keep us focused on that this isn’t the only thing we have to live on. There is a bigger picture to focus on and think about. I never had a coach who really tried to help you think about things outside of basketball. That’s really what he does. He tries to get you better at basketball while also learning about what’s going on day-to-day.”

Popovich is regarded as one of the best and most respected coaches in NBA and sports history. “Coach Pop” earned that reputation by leading the small-market Spurs to five NBA championships and being named NBA Coach of the Year three times. The 21st-year Spurs coach is projected to earn an NBA-record 20-straight winning seasons during the 2016-17 campaign. The next coach of USA Basketball’s senior national team, he is also the longest-tenured coach in the major U.S. pro sports leagues.

Off the hardwood, Popovich’s social awareness has added to his legacy.

For example, Popovich voiced respect for San Francisco 49ers quarterback Colin Kaepernick and his national anthem protest. Keep in mind that Popovich attended the U.S. Air Force Academy, where he was a basketball star and received a bachelor’s degree in Soviet studies. He served five years of required active duty in the Air Force and once considered a career with the CIA.

“A pretty good group of people immediately thought he was disrespecting the military,” Popovich recently told the media in San Antonio. “That had nothing to do with his protest. In fact, he was able to do what he did because of what the military does for us. Most thinking people understand that, but there is always going to be an element that wants to jump on a bandwagon and that’s what is unfortunate about our country.”

Popovich also believes that many white people don’t understand the stresses of being black in America. He cited having black assistant coaches talking to their children about dealing with the police, which is something he has never had to do with his two children. Popovich has also called race in America “the elephant in the room.”

“It’s easier for white people because we haven’t lived that experience. It’s difficult for many white people to understand the day-to-day feeling that many black people have to deal with,” Popovich recently told the San Antonio media. “I didn’t talk to my kids about how to act in front of a policeman when you get stopped. I didn’t have to do that. All of my black friends have done that. There’s something that’s wrong about that, and we all know that.”

So how did Popovich get “woke”?

The son of a Croatian father and Serbian mother, he gives lots of credit to growing up in racially diverse East Chicago, Indiana. According to the 2010 United States census, East Chicago was 42.9 percent black, 35.5 percent white and 19.1 percent other races and there are a lot of Spanish-speaking residents.

“I grew up in an integrated area,” Popovich told The Undefeated. “We lived in a project called ‘Sunnyside.’ Everyone had jobs in the steel mill. There was a Puerto Rican family, a black family and Czechoslovakian family, a Serbian family, whatever. Everybody was fine because everybody had a job. It kind of does boil down to that.

“If you’re disenfranchised, you got no job, you got no hope, you got nothing, bad things are going to start to happen. It’s not just America, it’s all over the world. Maybe that’s where I started to be aware of things.”

Popovich also credited his time in the military for making him conscious of the world, in particular his time playing for the U.S. Armed Forces Basketball Team in Eastern Europe and the Soviet Union. Such a mindset is certainly an asset for a coach with an international roster.

“The military, obviously, is as equal as they can be,” Popovich told The Undefeated. “I also traveled with USA Basketball teams. I saw cultures and players every place. I guess it just stuck. When we started getting foreign players, the more socially conscious they were, the more they would talk, the more they would interact and feel responsible for one another and owe each other something. It just felt natural.”

Popovich’s views on the importance of social consciousness is also more than just talk when it comes to his Spurs players.

He took the team to a private screening of the movie Chi-Raq with famed film producer Spike Lee in attendance in Cleveland last season. The Spurs had as a guest speaker last season John Carlos, the African-American sprinter who won a bronze medal in the 200 meters in the 1968 Olympics and joined gold medalist Tommie Smith in the controversial “Black Power salute” on the podium.

Popovich gave his players Between the World and Me, by Ta-Nehisi Coates before the season. The 2015 book was written as a letter to the author’s teenage son about the reality, emotions and symbolism of being an African-American in the United States. 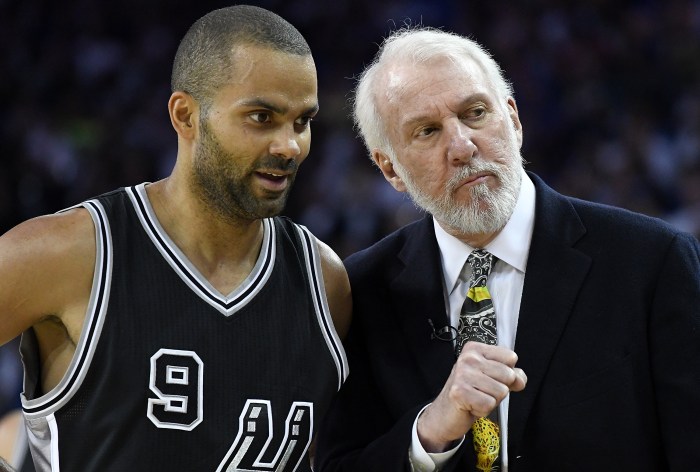 “Popovich is great off the court, always helping us out,” Spurs guard Tony Parker told The Undefeated.

Nate Parker, an actor turned writer-director-producer, made the film The Birth of a Nation on a mere $10 million budget before selling it to Fox Searchlight for $17.5 million at the Sundance Film Festival. The movie was about Nat Turner, an enslaved Baptist preacher living on a Virginia plantation who spearheaded a bloody and historic slave rebellion in Southampton County on Aug. 21, 1831. As many as 65 white people were believed to have been killed in the rebellion while white militias responded by killing more than 200 blacks and Turner.

Tony Parker, who is French, was one of the original investors in the film along with former NBA swingman Michael Finley, despite not being familiar with the story until reading the script. Nate Parker sold Tony Parker, who has an African-American father, on being financially involved in the film over a dinner meeting that the guard’s wife and mother attended. Tony Parker became an executive producer as well, and said the recent movie release had “good timing” because you can “always improve the way we treat each other.”

“I was just touched by the story and Nate’s passion,” said Tony Parker, who plans to be involved in future movie projects. “He wanted to make the movie so bad and he was so passionate about telling the story. It inspired me. [The script] was very powerful.”

Tony Parker first viewed the entire movie in a private showing with Popovich, Spurs general manager R.C. Buford and some other team officials in August. Tony Parker said that after the movie Popovich and Buford expressed how proud they were of him.

“It’s like your baby,” Tony Parker said of the movie. “It was just a fun experience to be at the beginning of the project and to see it grow to this, because it was a low-budget movie. To see it get put together and the end the way Nate put it together, it was unbelievable.”

Popovich respected The Birth of a Nation so much that he hosted a showing for his players during training camp. He thought it was important for his players to see the perspective that the film showed.

“It’s pretty obvious that the national stain of slavery continues to permeate our social system in this country,” Popovich told The Undefeated. “People want to ignore it, don’t want to talk about it, because it’s inconvenient. And when I saw Birth of a Nation when Tony brought it to San Antonio, I thought it was a great way to slap people right straight in the face. Not just say, ‘That slavery thing. There was probably cotton fields, it’s kind of hard.’ It was hard and disgusting and humiliating and life-defeating.

“It shows it in that film. It’s not just the physical stuff. It’s the mental, daily degradation that people suffered. It pervades families, psyches. To this day, we see the precipitant of all that.”

Aldridge said the Spurs players were “pretty stunned” by the tough movie.

“It definitely shed some light on things that people are forgetting about. It was put together really well. It’s perfect timing with what is going on our society. We’re trying to calm down the cops and the black killings,” Aldridge said.

Popovich also has been known to take the Spurs on field trips that he believes are mentally stimulating. Case in point: Last Jan. 9 Popovich took his team to see the popular Broadway play Hamilton: An American Musical, while on a road trip in New York City. Hamilton is a hip-hop musical about founding father Alexander Hamilton that’s seen critical acclaim and box office success.

Aldridge’s interest was piqued when Popovich told him there was “a hip-hop twist.” The five-time NBA All-Star became more excited about attending his first play after watching YouTube videos about it.

Aldridge said the “colorblind” Popovich tries to keep his players “intrigued every day” by asking them questions about the world. Aldridge also added that one example of how Popovich can relate well to people of color was his strong relationship with ex-Spurs forward Stephen Jackson, an African-American who grew up amid violence and poverty while being raised by a single mother in Port Arthur, Texas.

“When you get to know him, color doesn’t matter to him,” Aldridge said about Popovich. “He can relate. People can say that he and Stephen Jackson are really close. Stephen Jackson is the opposite of being from Europe. It doesn’t matter what you are. He connects with all people … He’s so open-minded to everything.”

San Antonio’s current roster includes players from the United States, France, Australia, Argentina, Latvia and Spain. Popovich enjoys learning about the world from each of them and broadening their horizons as well.

“There is a big world out there and a whole lot of stuff going on,” Popovich told The Undefeated. “The more aware people are, the better off. For our team, since we have so many people from so many different areas, it helps us come together when they realize how big the world is.

“Nobody even knew what Aboriginal was probably until [Spurs guard] Patty Mills came to us. He started talking about what that was like and their eyes were [very] big. Sharing cultures and experiences is huge.”

Most Frequently Asked Questions San Antonio Spurs Parking Overnight Parking Leave your car overnight forthe duration of the eventContinueDaily Parking Park separately each day, noovernight parkingContinue I will choose my own times. San Antonio Spurs Parking BackMultiple Entries/Exits Pay extra to have access tomy car at all timesContinueOne Entry, One Exit I do not need…

The typically drama-free Spurs underwent some turmoil during the 2018 offseason. Having lost faith in the team after the way his quad injury was handled, Kawhi Leonard – the superstar who was supposed to lead the organization into the post-Tim Duncan/Manu Ginobili/Tony Parker era – asked for a trade.The Spurs, who don’t often make blockbuster…