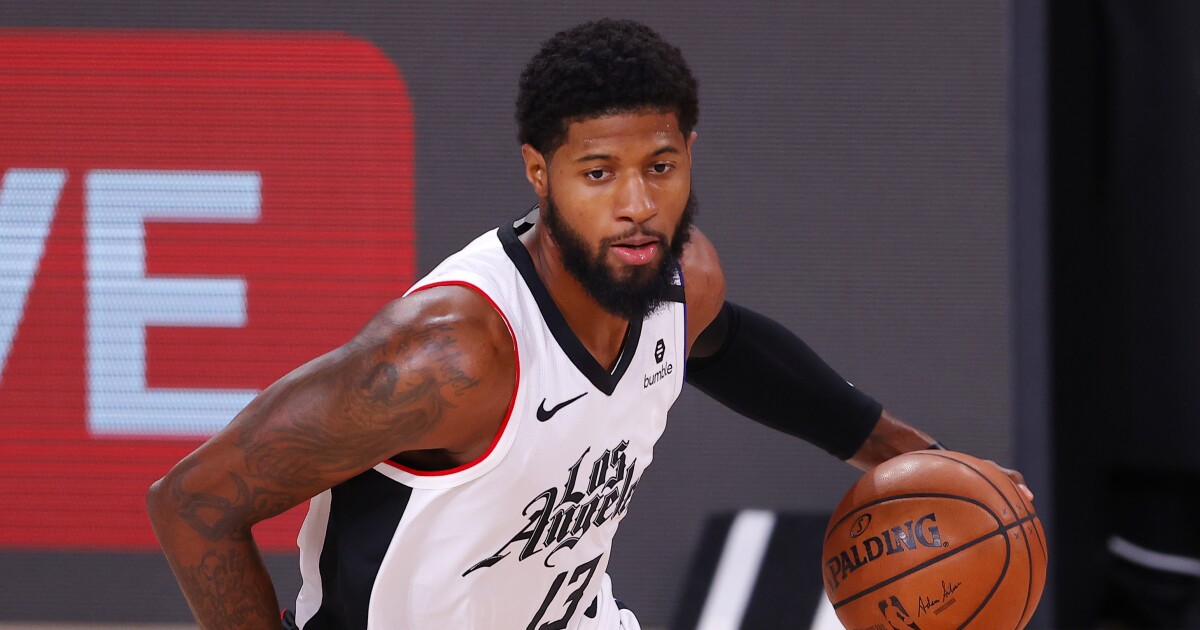 The version of Paul George that has been mired in a slump for much of the Clippers’ first-round playoff series against the Dallas Mavericks has looked nothing like the nearly unstoppable shooter of one month ago, when the NBA’s restart began at Disney World‘s ESPN Wide World of Sports Complex near Orlando, Fla.

George shot 52% on three-pointers during three scrimmages and began the seeding round by making 14 of his first 22 three-point attempts. He said his shoulders were healthy and, on an isolated campus with basketball as the only focus, his mindset was clear.

Yet since scoring 27 points in the opening game against the Mavericks, George has shot 21% overall from the field and 16% on three-pointers to become the first player since the Boston Celtics’ Bob Cousy in 1960 to shoot less than 25%, on a minimum of 10 shots, in three consecutive playoff games, according to the Elias Sports Bureau.

“We just keep trying to tell [George] to get out of his head, try to block out the social media, the fans and just get back to playing ball,” forward JaMychal Green said Monday, a day after the Mavericks evened the series at two games apiece. “We need him. We need him to get back to the high-level basketball he’s capable of playing, and I feel like he’s just in his head.”

The same sentiment could be said of the Clippers as a whole entering Game 5 on Tuesday night.

While reviewing Sunday’s lost 21-point lead and eventual 135-133 Game 4 defeat in overtime, the team saw a version of itself that looked nothing like the one whose timely adjustments and aggressive play won the series’ third game.

“We understand,” guard Landry Shamet said, “that we kind of weren’t ourselves.”

The Clippers became “emotionally unattached” after building their lead midway through the second quarter, coach Doc Rivers said. At other times, Shamet believed the team had “become a little too caught up in the emotions of the game.” Green just saw a group lacking edge, even during a postseason the franchise has focused on all season.

Since Game 1, George has made 10 of his last 47 field-goal attempts, including four of his 12 shots inside 10 feet and 14% of his catch-and-shoot opportunities, down from 41% during the regular season.

Rivers wants George to take at least 20 shots, praising the quality of the looks he received Sunday.

“There’s obviously a lot of pressure with this team. We have championship expectations,” Shamet said. “But for me seeing him, yeah, he’s not making shots, but is he still being a good teammate? Yeah. Is he still moving the ball, playing hard defensively? Absolutely. A good basketball player is not just defined by the shots he makes.

“On this team and under the scope that we’re under, yeah, he’s going to get ridiculed a little bit, but in these four walls with our team, we’ve all got his back. Nobody is worried about that. He’s playing the right way. He’s taking the shots that we want him to take, and one of these nights he’s going to have 40 and everybody is going to say, ‘Oh, yeah, well, he was supposed to.’ That’s what he does. He’s a scorer. Nobody here is worried about it.”

By metrics including points allowed off turnovers, second-chance opportunities and keeping the Mavericks out of the paint, the Clippers have matched or improved upon their regular-season numbers. Yet the Clippers have been porous in one-on-one situations.

The highlight of Doncic’s game-winning 28-foot shot in overtime “will live on for years and likely decades,” Dallas coach Rick Carlisle said — and with it, the defense of Clippers guard Reggie Jackson will be replayed for years. But it was hardly the first example of the Mavericks taking advantage of their individual matchup. Dallas is scoring 1.19 points per possession on spot-up attempts. The Clippers allowed 0.91 points per possession on spot-ups during the regular season.

“I think a lot of times we have a lot of miscommunication and are giving them easy baskets out there,” Clippers star Kawhi Leonard said Sunday. “But they’re doing a great job within their offense and getting looks, starting with Luka getting his guys open shots and him making his shots.”

For all the credit the Clippers have heaped on Dallas for tying the series, they also have bemoaned what Rivers called self-inflicted wounds created by “inexcusable” mistakes of not adhering to the game plan.

On this day in Kings history: Sim Bhullar breaks a barrier

Satnam Singh became the first player to be drafted when the Dallas Mavericks selected him at no. 52 overall in the 2015 NBA Draft. He ended up …

NBA TV showed several games from the only championship in Dallas Mavericks history last week, which at least one 2011 Mav watched.

Dallas Mavericks Adjust to Life in the NBA ‘Bubble’

As the Dallas Mavericks get back to business in a ballroom, guard Seth Curry thinks back to the last time he was in this type of setting. “Probably a wedding,” Curry said. “Might have been my sister’s wedding a couple of summers ago.” But now it’s all about the marriage of basketball and life in […]