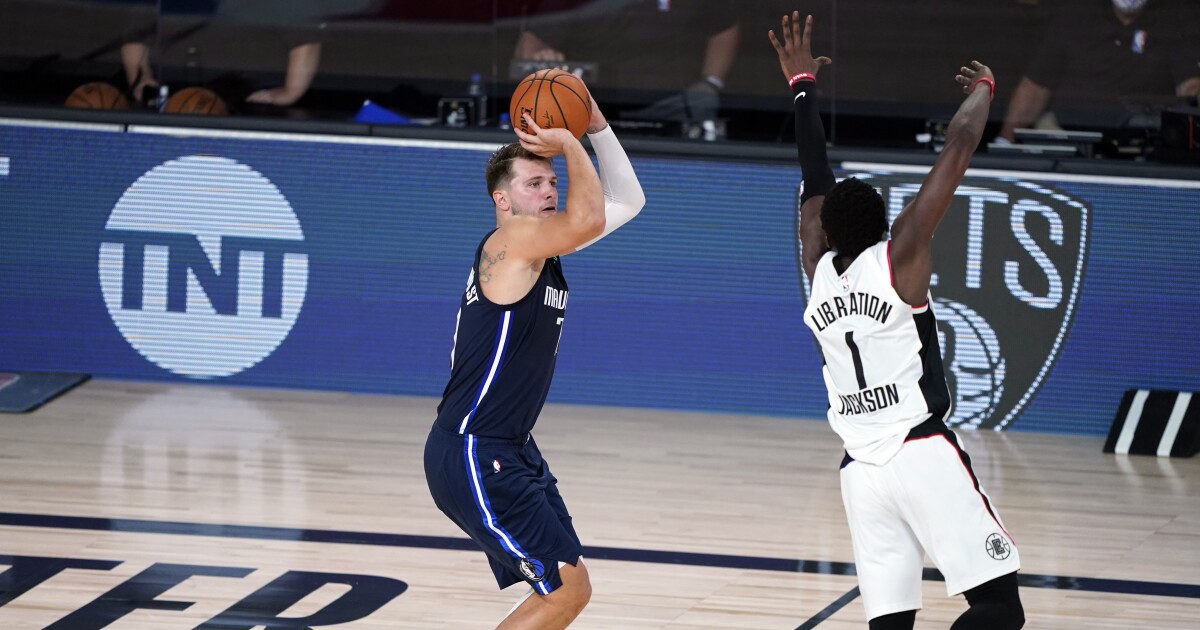 The whole court was in motion.

Luka Doncic slapped his chest. His coach raised his fist. His Dallas teammates stormed the court. Clippers assistant Sam Cassell walked toward the exit, with Kawhi Leonard and Landry Shamet steps behind.

But frozen in place, near the center of it all, was Clippers coach Doc Rivers. From the moment Dallas’ Dorian Finney-Smith inbounded the last possession of overtime in Game 4, until the Mavericks’ celebration raged following Doncic’s buzzer-beating, game-winning 28-foot shot, Rivers stayed hunched over, each hand resting on a knee, his eyes up.

The pose and pause formed a fitting coda.

Too often during Sunday’s 135-133 loss, the Clippers were slow to react while watching their 21-point lead, as well as their control over this first-round playoff series, crumble right in front of them.

By allowing a Dallas team whose best player, Doncic, was playing on one healthy ankle, and whose second-best player, Kristaps Porzingis, was sidelined by a sore right knee, to shoot 50%, the performance raised fresh questions about the Clippers’ ability to turn their championship ambitions into reality with the series tied 2-2.

“The thing is, we’re not an emotionally weak team,” Rivers said. “But today we were.”

They had no match for the physical and mental strength of Doncic, the 21-year-old star who delivered an all-time playoff performance despite being a game-time decision because of the ankle he’d rolled less than 40 hours earlier. Doncic finished with 43 points, 17 rebounds and 13 assists and joins Michael Jordan as the only players in postseason history to score at least 40 points and make a game-winning shot.

“He’s playing amazing basketball,” said Kawhi Leonard, who finished with 32 points and nine rebounds but whose fadeaway shot from 21 feet couldn’t deliver a Clippers victory in the final second of regulation.

With nine seconds left in overtime and the Clippers trailing by two, Leonard drove into the paint and fired a no-look pass to the corner for Marcus Morris Sr. and a go-ahead three-pointer.

Yet the reaction of the Clippers’ bench was subdued, knowing Doncic still had time.

Out of a timeout, Leonard, a two-time defensive player of the year, stayed on Doncic’s hip, but a screen led Reggie Jackson to take the one-on-one assignment. Doncic crossed Jackson over and sank his shot from 28 feet. Leonard said the switch was part of the plan, but Rivers said the team had failed to deny Doncic the ball while executing the switch.

“One of the best feelings I ever had as a player,” Doncic said.

Clippers reserve Lou Williams needed only 20 shots to score 36 points off the bench and was a catalyst of a 10-2 run during the last 2:24 of the fourth quarter to force overtime. But the late run couldn’t undo the mistakes made in the second and third quarters when Doncic, Seth Curry (15 points), Tim Hardaway Jr. (21 points) and Trey Burke (25 points) began taking apart the Clippers’ lead, one possession at a time.

“This is my 18th year as a head coach in this league,” Dallas’ Rick Carlisle said. “I don’t know if I’ve ever seen a game where a team fought as hard.”

Key adjustments made by Rivers that helped produce a Game 3 victory were rarely seen only two days later. Instead of defending 7-foot-4 center Boban Marjanovic with 7-foot Ivica Zubac, the Clippers allowed the Mavericks’ massive center to often face the 6-7 Harrell. Marjanovic responded with 10 points in 16 minutes. Dallas constantly targeted Jackson in pick-and-rolls, with success.

While going six minutes without a field goal in the second quarter, and being outscored 35-19 in the third, Leonard said the team “didn’t have any energy.”

Highlights from the Clippers’ 135-133 overtime loss to the Dallas Mavericks in Game 4.

“It’s frustrating to see where we made mistakes at, you know what I mean?” he said. “But it’s something to learn from. We’ve still got two games and we’re looking at a best-of-three right now. We’ve got time.”

Yet time is ticking for Leonard’s running mate Paul George to find solutions. After making three of 14 shots for nine points, he is now 10 for 47 in his last three games. Despite Leonard’s bravura performance, the Clippers were outscored by 13 in the 38 minutes he shared with George.

“Luka is playing phenomenal,” George said. “We’ve got to give credit where credit is due, but to be honest, in hindsight, if I shoot the ball better, this series would be a lot different.”

Asked why the Clippers’ emotional fortitude had struggled, considering this roster has been focused on the postseason ever since it acquired its star tandem of George and Leonard more than 13 months ago, Rivers couldn’t say.

“If I knew that, I would be Sigmund Freud,” he said. “We’re so much better than what we’re playing.

“… [Dallas] just kept playing, they played together. They moved the ball. And you can see the different in the spirits. Like they make a run and everybody’s excited. You know, they make a run on us, and we cave in. So that’s on all of us. Me too. I’ve got to get our guys right.”

MINNEAPOLIS — Being without All-Star guard Luka Doncic for 13 games this season, the Dallas Mavericks have discovered how to stay successful without their leading scorer and assist man. Lean on Kristaps Porzingis. Porzingis tied a season high with 38 points, Seth Curry scored 27 and Dallas rolled to a 111-91 victory over the Minnesota […]